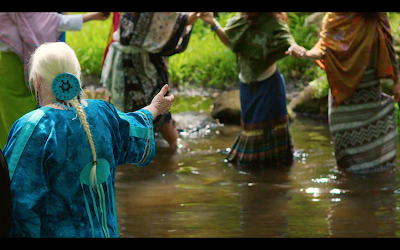 It’s been a long time since I have written on my blog, over a year, but I got involved in something that required my undivided attention.  Now, the first phase of a long-term project is done, and I’d like to share it with you.

Through my friend, Paul Moshimer, I met Grandmother Nancy Andry about four years ago.  Grandmother Nancy became one of my dearest friends, a member of our family, and she has introduced me to other Grandmothers and Native American Elders who have shared wisdom, laughter and wonderful times together.  Grandma Nancy has traveled around the US and Canada for the last 15 years, teaching women to sing an Algonquin Water Song as her teachers, Grandfather William Commanda and Grandmother Louise Wawatie instructed her to do.

The first night that I met her, Grandma taught me the song, which is sung like a lullaby by women to heal the water and to heal ourselves. Women are the life givers, like Mother Earth, and Native Americans believe that women are the Water Protectors and men are the Fire Protectors. There are many wonderful Water Songs from indigenous tribes, but this one is very simple to learn. You can sing it every day in the shower or watering your plants.
At a retreat that Grandmother Nancy held for a group of young, hopeful, talented women in March 2017, they urged her to record a video of the song so that women would be able to remember the Algonquin lyrics and the song would spread faster around the world.

Grandma discussed it with the Native Elders in Canada, who agreed the waters are so endangered that it was time to spread the song as fast as possible. She received permission from the family of the woman who wrote the song, Irene Wawatie Jerome, and from Grandfather William’s daughter.  We decided to make a video and start a concentrated effort to teach women around the world how to sing the Water Song.

The Grandmothers had shown me a kinder, better way to be a leader. The model is a circle, not a pyramid with one person at the top.  I had been searching for ways to encourage my own daughter, who was in her final year of college and about to embark on her career, how to be a strong woman and a leader without resorting to the cut-throat competition and hard practices that defined success when I was starting out in the film business many years ago.  I realized that things weren’t really better for women now than they were back then when I helped some of my friends found an organization called New York Women in Film and Television. So I called on a few of those creative, experienced professionals to join me, and we recruited younger women who were starting their careers to participate.

The female crew of the video included women from Chile, Cameroon, and Mexico. We asked our friends and families to donate to finance the video and received fiscal sponsorship from the Utah Film Center so the contributions could be tax deductible.  As much as possible, everyone’s time and all the production expenses were donated too.
We filmed the video at the end of August on my property and at a nearby horse farm. Fifty women, ages 8 to 80, came from all Four Directions to participate.  There were women from Japan, South America, Canada, Africa, and Native American reservations.  Two other Grandmothers – Grandmother Margaret Behan, who is Cheyenne and was one of the original 13 Indigenous Grandmothers, and Grandmother Clara Soaring Hawk, who is a Rammapough-Lenape Clan leader and activist trying to stop a pipeline scheduled to go under the Hudson River,  joined Grandmother Nancy to teach us the song.  We also were honored to have Jun-San Yasuda, a Buddhist nun who has been a Water Protector and activist for peace and anti-nuclear activities for over 45 years.   There was a ceremony with everyone to set the intention of what we were hoping to achieve and then we recorded the song in my family room, which had been temporarily turned into a recording studio.

For the next two days, we filmed the video which was directed by my dear friend, Nicole Betancourt, whose mother has been one of my closest friends for 40 years.  It was an amazing experience to have some of my best pals, Cherie Fortis, Susan Lazarus, Jackie Sussman, my daughter, my husband, talented singer and activist Bethany Yarrow and so many friends and neighbors joining together, working long and hard to create something so beautiful and full of heart.  Spirits and ancestors were called upon to guide us, and their presence was strong.

Now, nine months later, Sing the Water Song is ready to travel around the world. We were fortunate to be able to premiere the video at Al Gore and his daughter, Karenna’s Center for Earth Ethics annual conference, “On Faith and Water”.  When we began the project, they were both very helpful in explaining the crucial need for people to move out of their heads and into their hearts to save Mother Earth and our waters.

In just two weeks, the video has been enthusiastically viewed over 36,000 times on Vimeo and YouTube, with positive responses from Native Americans and Water Protectors all around the world.  We are hoping that women will record themselves singing it and post it as well on Instagram.  Our next phase of an impact campaign is beginning as we spread the video at events, in classrooms and festivals.  Our website will have updated information and a blog to let everyone know the progress of the song, and we are making a documentary film to show its journey.

Every morning, after I feed the horses, I go up on the hill above the barn in the cedar grove and sing the Water Song.  It only takes a minute, turning East, North, West and South as I repeat the verse. The practice connects me to nature all around me, helps me find my voice and gives me strength to face whatever is ahead of me each day. Now, more than ever, the waters need our help.  Helping to heal the waters is helping to heal ourselves.
Here are the links to Sing the Water Song:
YouTube:
https://www.youtube.com/watch?v=KC2FHciQ0sU

Posted by Victoria Cummings at 9:48 AM HAPPY TRAILS! WELCOME TO MY BLOG!

Over twenty-four years ago, during a midlife crisis, I gave myself a gift I'd wanted all my life. My Quarter Horse, Silk, is a former Western Pleasure & Trail show horse. She retired from the ring and became my greatest teacher. Eighteen years ago, we were blessed with her daughter, Siete (aka My Impulsive Hobby). Now, both horses live happily in our backyard.

I did so many dumb things and knew so little about caring for horses when I first bought Silk. Time and the horses have taught me some valuable lessons. I hope that I can share what I learn with other horse lovers and help people take the time to look at the world from the horse's point of view. Their message is full of honesty, trust and love.